Dear Body, I love you. 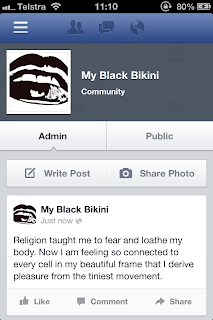 You can find me posting inappropriately here: 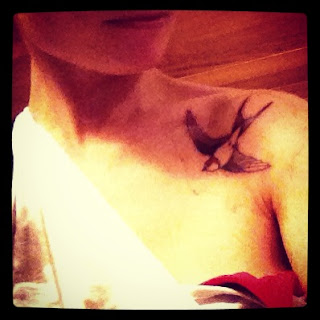 "Can you remember any of the things you were doing 18 months ago that you are no longer doing?"

A question that was asked of me today by our marriage counsellor.

The last two sessions have ended (maybe even started) with me in tears and a rubbishbin full of snotty, teary & sweaty tissues (yes I use tissues to wipe the sweat from my awmpits rather than spray anitperspirants, what of it?!). I think our sessions have taken a bit of a turn from dealing with communication issues in the marriage relationship to recognising and responding to my increasing misery (Her word).

Misery.
Wow!
Yeah that will wake a person up. If someone who sees me for 50 minutes every 2-3 weeks just whips out the 'M' word in the middle of polite therpaeutic conversation then I consider that something has gone terribly awry in my world. I didn't fight it though. She was goddarned right! I am miserable. A lot of the time. That is when I told her that I believe that I was very happy around 18 months ago. I had been out of the church for also about 18 months and life had never been more exciting for me. I was my own boss in every sense of the word and I was loving it. So she asked me the question that I should have been asking myself (had I had my head out of the Zabrowka and into some restful sleep then maybe I would have thought to ask the question!)... but someone asked and now it's time to answer. In the session I rambled on about how overloaded I currently feel but never really identified anything that was missing.

The first thing that comes to my mind sitting here in the library is exercise. Although I do still teach my Body Balance classes 2-3 times a week as well as practice at home, I have all but stopped beach walking and I haven't been to any RPM (spin) classes or used the gym equipment for months (18 months??). I have allowed many things to take over what used to be my precious workout time. The most obvious would be one of my 4 part-time jobs. Time to cull.

The next and far more trickier to fix IMO is the drinking and late night rascality. When my weekend exercise time was being carved out in the early hours of the morning, that then became a little difficult to reconcile with the mind bending late night awesomeness of the local talent at various live music venues. I had heard the Pied Piper and followed like a little lovesick heatseeker. I research (yes all nerdy-like with multiple windows open, googling and myspacing the bands who will be in Perth that weekend) and then gather willing companions for late night romps into the dingy and the dodgy... in the hunt for that magical drug, Nirvana. I have found it enough times that I am now fairly addicted. But as Jerry Seinfeld so sagely illustrated:

JERRY: I never get enough sleep. I stay up late at night, cause I'm Night Guy. Night Guy wants to stay up late. 'What about getting up after five hours sleep?', oh that's Morning Guy's problem. That's not my problem, I'm Night Guy. I stay up as late as I want. So you get up in the morning, you're ..... (?), you're exhausted, groggy, oooh I hate that Night Guy! See, Night Guy always screws Morning Guy. There's nothing Morning Guy can do. The only thing Morning Guy can do is try and oversleep often enough so that Day Guy looses his job and Night Guy has no money to go out anymore.


So I will need to let Night Girl and Morning Girl have at it and then we'll all go out for coffee by the beach and pick up the pieces. Some compromising and canoodling will take place and then I am confident that we will have before us a sensible and concrete plan for ulimate health and fitness as well as stellar witching hour trysts with the rock gods of Perth.

I also asked The Rockstar if he could think of anything that I had stopped doing and he thought of this blog. Which is why your eyes and brain have just been tortured with this increasingly superlative blog post written whilst I was supposed to be doing my taxes. Yes today it the last day to do my taxes. Yes it is nearly 3pm and the tax office closes at 4pm... but I'll let Morning Girl sort that out.
Posted by Maureen at 2:54 PM 5 comments:

The last two months have not been very fun for me. My marriage has been rocky at best. My confidence has been shattered and I feel utterly exhausted. The high that I had been riding before this chaos erupted now seems like a distant memory. I can still catch glimpses of that happiness though and I hold those specks of light close to my heart as I prepare to re-launch Project Maureen.

I have had private conversations (online and in person) with many people; regarding this slump in my life. I appreciate all of the virtual and real hugs. I have mulled over the many words of advice. I have also spent many hours feeling numb and not doing much of anything. The house is a mess, my 'diet' is ruined (!), I wear the same clothes over and over (ew!). The kids are left to fend for themselves... which has been 'good' and 'bad',  they've been making their own food but watching waaaay too much tv.
With so many big decisions looming I have been forced to reconsider many things. I realised recently that I have been pouring a lot of my energy into things that drain me physically, emotionally, mentally, spiritually? I have been teaching too many Body Balance classes and not taking the time to warm up beforehand or otherwise exercise for my own benefit. The result is that I feel very tense in my neck and shoulders. I seem to have pulled something deep inside my right shoulder and it has been like that for weeks. I punched a very hard surface several times (not in class! during an argument with Dude) which left bruising and one of my hands is still sore from it (please don't grab me by the left hand atm!).
I have mystery bruises on my body with no idea where they came from.
I spend an inordinate amount of time on facebook and find myself easily embroiled in arguments that leave me feeling tired and cranky. I think at the time that I am being very reasonable and calm about each encounter and have been mentally applauding myself for being able to engage in religious debates without getting worked up but it is not until after I have wrenched myself away from the computer that I recognise the ill effects.
I went to a sound healing meditation session the other day and I was so tired that when I laid down I was able to very quickly get into a meditative state. The sounds of the didgeridoo, the crystal bowls and the gongs were incredibly soothing as well as transportative (yes I make up new words. This one really should be added to the dictionary though, can someone get onto that please!). I drove home feeling rejuvenated and incredibly light. For the next hour or so I felt as though life were not so difficult as I had previously felt it to be. The heaviness of the previous weeks melted away.
Then I got back online.
Over then next few hours I felt the heaviness return. It was gradual but by the evening the change in my overall mood was significant. And I knew what the problem was... well, problemS.
Although I really do think that it is important for me to take the time to speak up about the things that I experienced as a Mormon and as a recovering Mormon; I do not think that it serves me very well any longer to spend quite so much energy on it. I want to start living my life with new ways to define myself. I want to start working towards some goals rather than trying to get away from my past. I know that Mormonism will always define me in some way but I want to start adding more things to my life so that when I meet new people they will not so easily see those roots.
My measuring stick for success will be to ask myself how well do I accept my Mormon friends? Even though Mormonism is not for me I would like to be able to view Mormons almost from an anthropological kind of perspective. A phenomenon worth studying. Worth studying because I love so many of them. The teachings that I believe are harmful will be the ones that I will find some way to address in the wider community. For example, the Mormon religion unfortunately promotes rape culture.  So, I will continue to add my support to endeavours that tackle this problem in the wider society e.g. SLUTwalk and Reclaim the Night. The Mormon religion preaches that homosexuality is a sin. So I will promote LGBTQI rights at every opportunity.
I will still engage in the ex-Mormon groups that I am a member of on facebook but I think that I will scale back for a little while so that I can turn some of that energy back towards healing and growth for myself. I need to commit to less time on the computer in general. I need to get more active and I need to eat better. I have come to learn that the saying "You are what you eat" is more true than I had thought. Apparently the food we eat has a massive impact upon our mood.
Goals = Meditate daily. Buy a Thermomix. Learn new healthy recipes. Buy a Tibetan singing bowl. Sing. Move. 7 hours sleep. Minimise computer time. Prioritise my health and well-being. Create a balanced life. Practice love for myself and others.
Posted by Maureen at 10:11 PM 19 comments:

Seriously you guys... I neglect my blog for a few days (weeks) and THIS is what you all get up to!!! Who the hell registered all of those votes for the kissing challenge over there for my new 30-day challenge? Hmmm?

I've been lazy and not started the meditation challenge (how lazy does a person have to be to not LIE DOWN?!!) so I will take my medicine and begin the new challenge you have set for me.

What if I'm not that fond of Dude on a particular day huh? what then? you didn't think of that now did you...

I'll write a bit of a journal as I go along and report back every now and then (Wednesdays seem to be my main blogging days... Wicked Wednesdays we'll call them).

Rah! Kissing! Seriously, you're all perverts! but that's why I love you.
Posted by Maureen at 2:02 PM 8 comments: 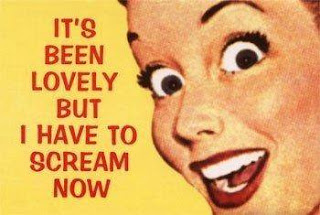 This cartoon aptly describes my current level of insanity. I can't share the details with you but I will report that I am headed off for a 90 minute massage on Thursday; the kids go back to school tomorrow and my fridge is stocked with Strongbow Dry. I will survive.
Posted by Maureen at 4:35 PM No comments:

I've been having a bit of a rotten time lately so I just wanted to check in and share my favourite comic this week ... I am still to begin the next 30-day challenge ... working on sanity levels first. Big LOve.